Reading in bed just got a little hotter.

The Spaces Between Your Screams by Christopher Hivner 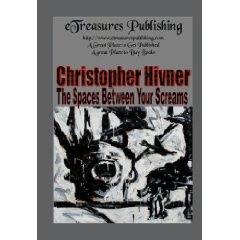 
ISBN#: 978-1-60702-641-9
GENRE: Paranormal / Contemporary / Horror /Ghosts / Demons / Witches / Shapeshifters
LENGTH: 298 pages
SEXUAL CONTENT: Luke Warm
ROSE RATING: 4 Roses!
REVIEWED BY: Phoenix
BLURB:
Don't scream. It only entices them, and when you stop, the real terror begins. In the moments between your cries, the monsters are released, profane and insatiable. Werewolves, witches, vampires and creatures never named prowl from the darkness. Soul collectors knock on your door while animals you won't find at the zoo slither through the yard around the dead bodies. Angels hover over your house, just in case. Behind them, in the bushes, demons wait for the same reason. A storm brews in the distance, ready to sweep you up and take you away, but to where? And would it be better than here where you're afraid to stop screaming and machinery hidden in the clouds has covered the sky?
REVIEW:
A collection of horror shorts that will give you the willies, that’s what you’ll find in Christopher Hivner’s The Spaces Between Your Screams.
This horror anthology featured stories of the supernatural, ghosts and demons, murder and mayhem, lust and greed, and blood and gore, with a side of humor for good measure.
There were so many stories in this anthology of ghoulish tales that it would be impossible for me to discuss them all, roughly forty-one, give or take. Sufficient to say, there were several I really enjoyed, some I didn’t, and a few that made me go, “hmm…” Mr. Hivner has a wonderfully creative imagination when it comes to the strange and bizarre. One of the things I enjoyed most about his book is that each story is short enough to not drag on, but long enough to get your attention. It’s the perfect collection if you’re short on time, but want to get in a quick read, start to finish. You could easily read the entire book in a few days, or take your time and spread out his gruesome tales over a few weeks and not feel like you’ve missed something along the way.
I did notice some editing errors and questionable point-of-view violations, but nothing that really took away from the book as a whole. Overall, I enjoyed reading it and would probably recommend it to anyone who likes horror. A word of caution to young readers, although minimal, there are some sexual situations and/or references in a few stories that may be inappropriate for readers younger than 17.
Do you like being scared witless? Were morbid television series like Tales From the Crypt right up your alley? Then grab a copy of Christopher Hivner’s The Spaces Between Your Screams, you’re bound to find at least a few stories in his macabre anthology that will set you’re teeth a chatterin’.
Posted by Pillow Talk Reviews at 10:22 AM

Leave a Rose Upon My Pillow

Leave a rose upon my pillow before you go, kiss my lips so that I’ll know that the love I gave you was not in vain and that you’ll come to me again. Let me know you treasured all we shared, show me that you truly cared. Vow your love before you go, Look in my eyes and let me know.
By:Bobette Bryan

1 Rose--Needs to be put to rest. Characters and plot had little depth. Story was riddled with grammar and punctuation errors, and/or blatant POV violations. Needs a Major overhaul. These reviews will not be posted.

2 Roses--Needs some work to make it an enjoyable read. Several grammar, punctuation, and/or POV errors. The characters and plot were interesting, but needed further development. Definitely needs some editing.

3 Roses--Enjoyable for the most part, but will not go on my keeper list. Some grammar, punctuation, and/or POV errors, but not enough to detract from the story. Decent character and plot development. A little editing would make this story really good. I may or may not recommend it to a friend.

4 Roses--Really good and will probably go on my keeper list. Few grammar, punctuation, and/or POV errors. Characters and plot were well written. Minimal editing would make this story great. Would likely recommend this to a friend.

5 Roses--Great story! I'm so glad I got to read it. If there were any grammar, punctuation, or POV errors, I didn't notice. This will definitely go on my keeper list and I would recommend it to my friends.

The Bouquet--Reserved for the best. This story was awesome! I didn't want it to end. I will be thinking of the characters for a long time to come. I would read it again and will definitely tell my friends about it.

In accordance with FCC guidelines regarding endorsements and testimonials for bloggers, all books reviewed here were bought by the reviewer, won in an author contest, given away as a free read, or donated by the author/publisher for the purpose of receiving a review. We do not receive money for book reviews or author interviews.
Review Request
Interview Request
Meet the Reviewers